Federal agents who went to Robb Elementary School in Uvalde, Texas, on Tuesday to confront a gunman who killed 19 children were told by local police to wait and not enter the school — and then decided after about half an hour to ignore that initial guidance and find the shooter, say two senior federal law enforcement officials.

i am completely depleted of energy being able to rant about this shit, all i can hope is that journalists stop giving cops a free pass when it comes to their account of situations—any of them. there are literal gangs in the lasd & it’s just kind of accepted. cops literally have to shoot someone on camera for the media to scrutinize police at all, and it’s always just ‘one bad apple’ excuses.

the fact is, most journalists have become part of the authoritarian class that needs to be abolished (‘held accountable’) for their standard procedures. they enable this violence by moving on from it. they enable state inaction by aligning into partisan circles. they get the story wrong by accepting whatever is said from behind a podium & ignoring whatever is said from the streets.

this is all so exhausting because 19 dead kids is somehow not the worst part of the story, just the most tragic. that alone should signify exactly how broken this society truly is.

today marks two years since the murder of george floyd. there aren’t many headlines about it, given what happened yesterday. even though i’ve seen no articles about it, there certainly is a common thread through both of these horrific incidents: the gutless & self-interested nature of police.

here’s an account of how the police acted prior to the massacre in uvalde yesterday, via the new york times:

The Uvalde Police Department then received a call about a crashed vehicle and an individual with a weapon making his way to the school, Lt. Olivarez said.

Law enforcement officials who arrived at the school and tried to enter the building were met with gunfire by the suspected gunman, he said.

“Some of those officers were shot, so at that point they began breaking windows around the school, trying to evacuate children, teachers, anybody they could trying to get them out of that building, out of that school,” Lt. Olivarez said.

so these officers, who were apparently well enough to break windows, decided to stay outside the school when they knew someone was inside murdering children. their initial excuse was the gunman was wearing a significant amount of body armor—which is actually not true at all.

to me, the way firefighters walk into a burning building should be the standard for all public safety. cops should walk into a school when they know someone is inside with a gun. if they die, they die ‘heroes.’ but to prevent the deaths of children seems like it should be priority #1.

but the cops wouldn’t enter a school & risk a gunfight to try & save the lives of those kids. who knows if they actually would or could have, but isn’t that the whole point of the police? so after a massacre, the families of the dead can be consoled by the idea that at least everyone did their job & there was no chance their kids could still be alive? 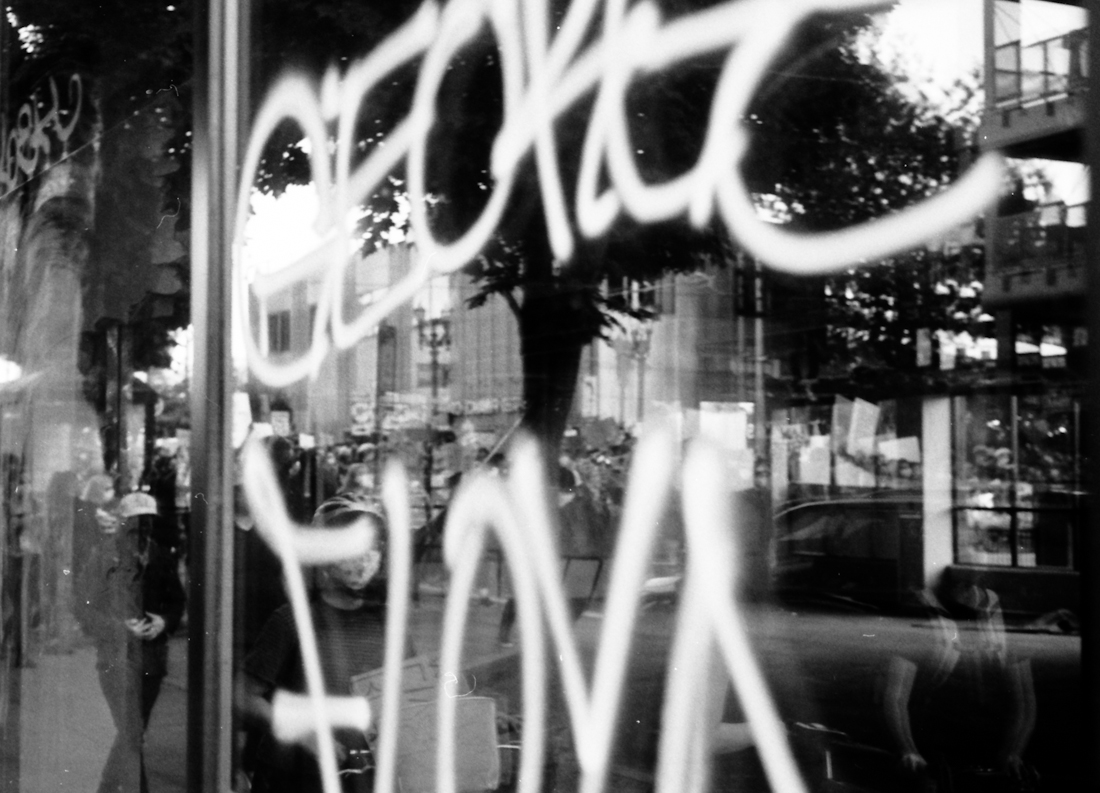 two years ago, we saw the same gut-wrenching indifference to life in derek chauvin holding his knee on the neck of george floyd for eight minutes & forty-six seconds. we all saw it in broad daylight, where chauvin didn’t even care he was being filmed murdering a man. this was just short of six years from the last time a black man was killed by a police officer on camera in broad daylight whose last words were “i can’t breathe,” when daniel pantaleo choked eric garner to death on staten island.

floyd, knowingly or not, used a counterfeit $20 bill at a convenience store. eric garner was approached by police, suspected of selling single cigarettes. these men were murdered on camera for no other reason than the cops were that confident in being able to get away with it.

the writing on the wall is clear. it’s covered in the names of the dead, proof of a failed state. proof that abolition of the police is necessary or fascism is inevitable. the victims of police violence are erased from walls, pushed out of the news cycle. the radio might note the killing of 12-year-old tamir rice every 22nd of november & move on to the daily report on the status of the stock market. we’re all witness to it, yet somehow divided on the value of a life. capitalism is going to kill us all.

i’ve been struggling in aa meetings today. we’re supposed to accept all in recovery, and while i know it’s a character defect to be dealt with in the seventh step, i just can’t. i want those cops to be alcoholics & i want them to drink themselves to death. being a cop is a choice. making decisions while on duty is a choice. and it’s hard to reconcile that picking up a bottle is as well. i don’t want those guys to recover from anything. i hope the blood on their hands haunts them into darkness forever. i hope they choke.

The Writing On The Wall

it is beyond fucked that the phrase, what can be said that hasn’t already been said before? is prominent rhetoric about children being murdered at their elementary school.

the ag of texas is suggesting teachers be trained & armed. i’m just thinking about that training room where they show some 29-year-old, fresh out of grad school & wanting to help 11-year-olds learn math, a life-size printout of a teenager holding an assault rifle and telling them to shoot it in the face until they’re numb to the idea of it being a real kid. absolutely psychotic even to just imagine, much less present as a ‘solution’ to anything.

—this is all on top of the fact cops had a gunfight with the shooter before he entered the school, but the cops waited for a swat team to show up before going in after him. meaning the fucking police waited outside of a school where they knew a gunman was inside killing kids. anyone who promotes the fucking cops as another solution can get fucked, these pigs are cowards—

families are getting swabbed for dna because some of the children can’t be identified. “the agonized screams of family members are audible from the parking lot.”

i have no children to worry for & shit like this still just ruins me—there’s no way to come to an understanding with something like this. as senator chris murphy asks, rightfully so, what are we doing?

it’s incredible how the biden administration is running the narrative of the climate crisis. today, while praising the military, he said this little gem:

My message to all Americans is straightforward: We know hurricanes are coming our way. They grow more extreme every season thus far. Pay attention to the hurricane warnings. And, and, and — follow — follow the guidance of your local authorities.

this is hilariously dark, considering his clean energy plan to combat climate change was a two-trillion dollar investment into clean energy infrastructure over his first term. now it’s just, ‘wait it out, listen to your local authorities, good luck, we’ll send in the military.’

then again, should we have expected anything else? according to his covid response plan, unemployment benefits should not have been cut last september, given the daily average of new cases in the us hit 100,000 again yesterday—not including the amount of positive results for people who test at-home.

meanwhile, biden wants cities to use pandemic relief to fund the police. (i know when i think of public health, the lapd is the first organization that comes to mind. with only a $1.9 billion budget for 2022, it’s obvious they need the money.)

it’s not so much that i’m surprised by the inhumanity of the state, but more that anyone can support this administration at this point. the promises republicans make to the people may be horrifying, but at least they try & follow through with them. an enemy who says exactly how & why they want to destroy you is far better than an enemy that pretends to be a friend.