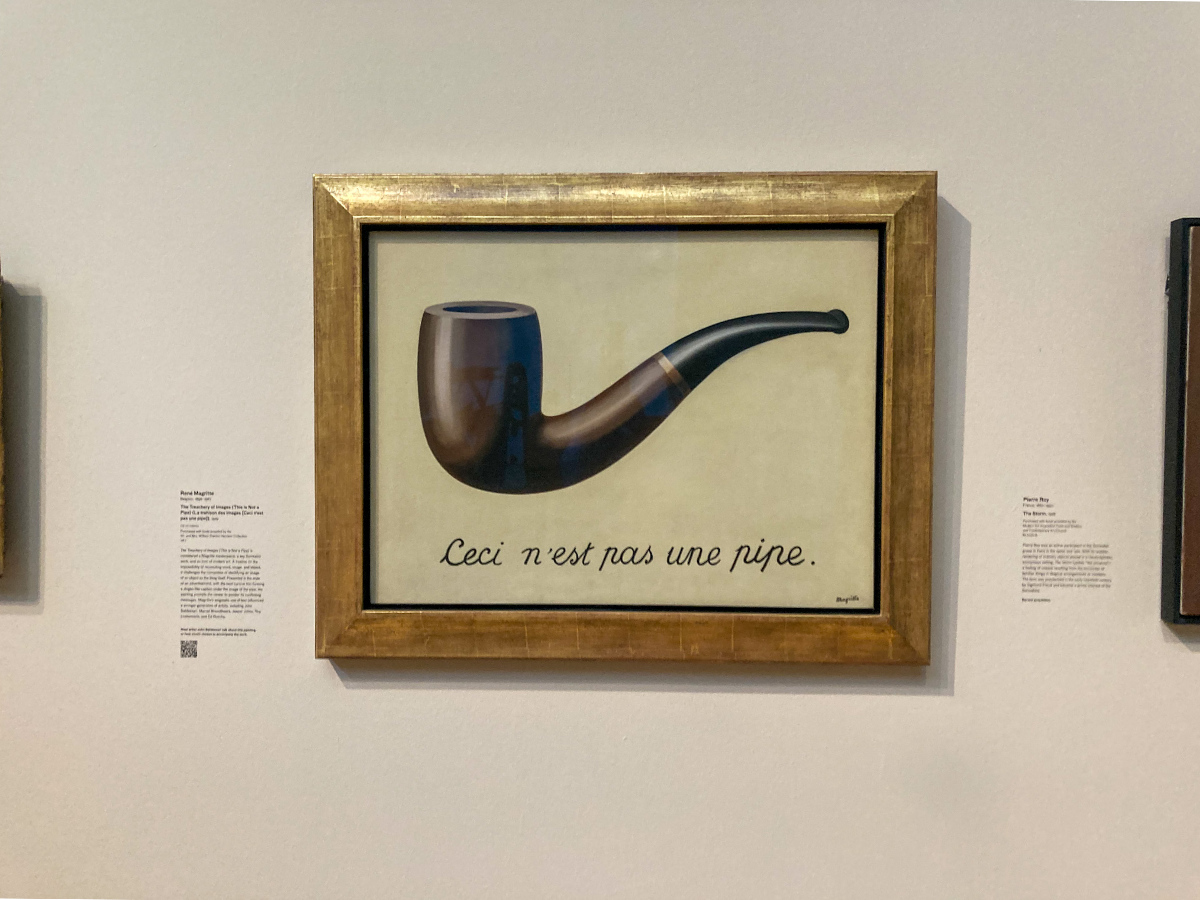 The Treachery of Images by René Magritte, 1929

I got to see The Treachery of Images in person for the first time in my life on a recent trip to LACMA. I just stared in awe for a few minutes. There are few works I find as significant as this. Plenty is already written regarding the famous painting, but it leaves me wondering what he would have painted about the world as it exists today, as nothing really is anything at all in a digital world. Moreso, aesthetics rule this age, while ignoring the idea that any result should have some underlying communicative concept—some sense of humanity.

A recent example of this is in the various responses regarding the tragedy during Travis Scott’s set at Astroworld, resulting in the deaths of ten audience members aged 9-27. From Demar Grant at The Globe and Mail:

Scott’s concerts are often electric, buzzing with energy, but they’ve never escalated to this level, and unfortunately this tragedy is a symptom of rap’s adoption of punk sensibilities.

Their music is visceral in the same way punk was. The lyrics get fans charged up, and the instrumentals do the rest. Instead of the mesmerizing lyrics, beautiful melodies or rhythm that were once preferred by rap fans, they now rage on energy alone.

Even as the source is trash media, I’ve seen this sentiment echoed around social media as well. That somehow this is about punk rock & the aesthetics of ‘rage.’ While I know a thing or two about going to punk shows to let out some energy, there has been a decades-long rule of punk: we take care of one another. (For example: here is an clip compilation of Green Day stopping shows to make sure people are OK—including Billie Joe drop-kicking a dude who was assaulting a girl in the crowd.)

Something important has been lost in time as tech/media culture & their prioritization of face-value content have taken hold of our collective attention to the point of diminishing that people & their ideas are still meaningful. The profit-based structures of entertainment—from hip-hop to television to art museums—rarely will risk potential earnings to make any sort of statement about the world they represent. LACMA may display this wonderful work by John T Riddle, Jr or Chris Burden’s outsized LAPD uniforms, but the museum itself would never make any sort of statements, much less take action, about our societal issues regarding race or policing. (Not that I’d accuse them, but I’d assume this has to do with big-money donors.)

During the Vietnam War, artists responded in dramatic fashion to the injustice. Now, after decades of war in the Middle East, there’s just Art Basel and other absent-minded trade shows for the wealthy regarding ‘theory’ & ‘meaning,’ but never ‘challenging.’ Never ‘change.’

So I think of Magritte & his pipe, how it wasn’t snobbish or high-brow, but still high-minded. How anybody could see it and think about it. How we’ve lost the drive, in art and broader culture alike, to reach for that impact. How abstraction & American modern art—essentially & ironically bankrolled by the CIA—helped pave the way for subjective aesthetics that seem more appropriate for an Instagram feed than serious consideration as commentary. How museums have just now begun to respond to centuries of racism by featuring a few more black artists in the wake of George Floyd. How driving down Sunset on a Saturday night to see people judge one another’s outfit is basically a microcosm for the extent of American culture at large now.

This is not an aspiration, but it is treachery.

“A Culture of Meaningless Aesthetics”