i think the most dangerous part of silicon valley solutionism is in temporary languages. social media tends to be based in an established language: twitter had writing, instagram photography, tiktok has video. the apps start by doing one thing, and then expand from there.

however, in a ‘greater scheme of things’ context, what this really creates is a vacuum where the same sentiments can be expressed repeatedly without having any real-world consequences. cause and effect, but without the effect.

throughout the social media evolution, at least in the united states, only the occupy wall street protests temporarily shifted the notion of what protesting was in the US. (while the recent black lives matter protests have been more extreme, they are nothing new from a tactical standpoint.) with occupy, the state didn’t know what to do, the media didn’t know how to report, and so people actually paid attention.

what we see now on social media is almost the opposite: the endlessness of disjointed demands with no central thesis or action to speak of. it’s a bunch of dominoes, still packed together tightly in a box. if anything, the repetition from one system of language to the next only dilutes the integrity of ‘opposition voices’ in western media, as they appear to be more clout-chasing than ardently working toward any actual change.

so of course no leftist sentiment will be taken seriously, especially after bernie lost in 2020. there will be small wins in local government, and it will be these changes that, for now, matter most. because online has been fully consumed by a spectacle, and like everything else in the US, has such fervent actors that being a part of it passively isn’t really possible anymore.

but, the people who perpetuate this are the nucleus of the last great hope of the American economy, and neoliberalism has little to no care for ideologies to the left of its own. so this shithole media sphere of paid pundits and revisionist history will be the facade of this country for the next generation. it’s a grim fucking future.

There were three instances in immediate succession of one another that made it easy to tell Pete Alonso had just hit another home run: The deeply satisfying crack of his custom-painted bat, the acknowledgment of his bobbling head following the ball out of the park, and the way he almost danced himself back into position, waiting on the next pitch to send into the upper deck of Coors Field.

I haven’t watched baseball in something like ten years, I just happened to see the Derby about to start and MLB was streaming it for free. I caught it from the first pitch and never looked away.

There were any number of incredible things happening at the derby, including the cancer-surviving call-up Trey Mancini making it to the final showdown, but Alonso’s performance was nothing short of pure baseball entertainment. The guy loved every second of his masterclass, and I loved every second of watching it. It was such a pleasure to see—I’d convinced a couple friends to and the texts of HOLY SHIT kept coming in.

Journalists often start reporting with sports. It’s an easy gig to see who has the chops for reporting: everyone has the same facts in a stat line, and one writer to the next will tell the story of a game in their own way. Some people take a horse race and make it Fear and Loathing in Las Vegas. There’s some room to play.

So it was incredibly disappointing to hear on NPR this morning the story of Shohei Ohtani and his lackluster, overall disappointing performance at the derby. The reporter led with his name and the only sound byte was the one interesting moment of his at-bat, where he saved himself from an embarrassing early exit with two quick homers in the last five seconds.

Ohtani, though, is baseball’s current golden boy (and for good reason), but the reportage of his name over Alonso’s performance is a crime consistent with the rest of ‘journalism standards’ in the United States. The bigger names are prioritized over better stories.

Maybe it’s that I’m in LA and Ohtani plays for Anaheim, but it was pretty obvious whoever put the report together didn’t actually watch the Home Run Derby. Because if they had, they’d have known Ohtani was a relative footnote, a bit of hype that quickly faded behind a record-setting, thoroughly-enjoyable performance. It’s these choices that are really burning the world out, too: preferential reporting for marketable names is making us miss out on good things.

The media in general is in an awful state of unearned self-righteousness, and so few things can distract me from how fucking tragic the world can be. But Pete Alonso did for a couple hours last night, and that’s more than I can say for any type of ‘journalism’ I’ve seen in years.

currently on the shelf is Funny Weather: Art in an Emergency by Olivia Laing. i’ve only read a bit of the actual heart of the archive, as the introduction has me returning to it over & over again: 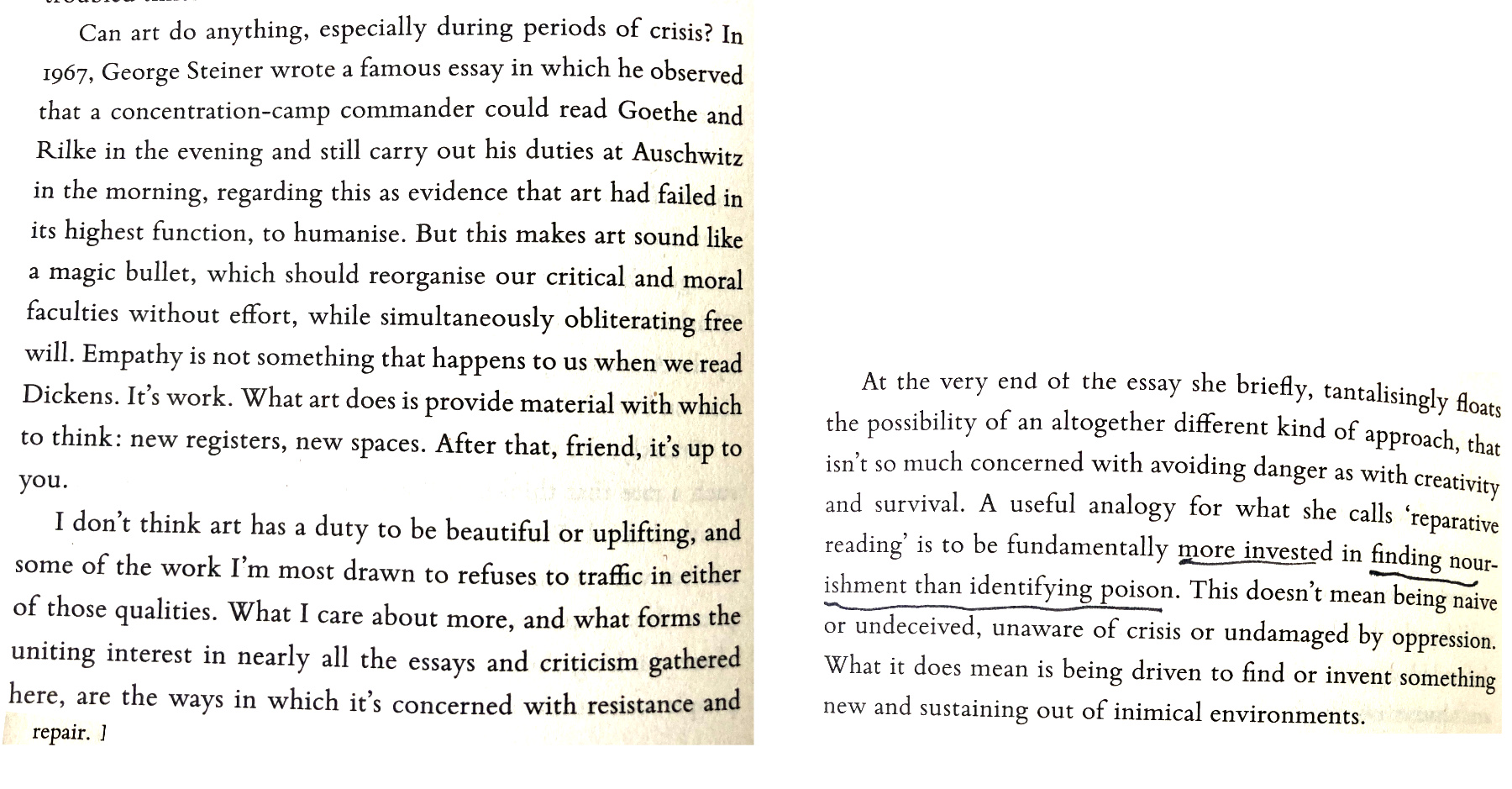 society of the spectacle

since the majority of the US seems perfectly content within The Spectacle—that is to say, a version of reality where one might think Donald Trump was an aberration and not a result of the system, or where patriotism is defined by what news outlets one consumes information from—advertising, entertainment, journalism and art are all becoming the same thing. through whichever medium or message, it’s all become a kind of lifestyle critique by way of marketing scheme. people demand pathos in their entertainment, as the entire sphere of neoliberal reality is either performed on-screen or enforced against its opposition (and, therefore, ignored).

(the fact we continue to endure massive inequality during a global pandemic while the world is cooking itself & no substantive or realistic conversation about taxation, healthcare or the climate crisis has taken place is all the evidence needed to show how brutal that truth is.)

attempting to participate in this new reality we face, as both a person & an artist, is a near impossible feat. a society that uses art as a way to release its own demons—the way christianity offers forgiveness for sin in exchange for a confession of the soul—will never morally progress. words & actions work in tandem the same way art & governance do.

i look out at the cultural landscape in the united states and see nothing worth participating in, as nothing of true value exists in advertising & everything is now an ad for some way to project morality without supporting any actual change.

a new reality, a new religion

the united states is not a country, it’s a business. politicians are either actors or executives, and culture is all an ad. the entertainment with moral expectations is propaganda for the idea this country has a soul. (spoiler alert: it doesn’t.)

& to that end, there is a limitless amount of poison to identify in a country that refuses to even acknowledge the brutality of its founding. so a limitless amount of potential for vapid entertainment with a light social commentary rests in a blood-soaked history text. a new sermon every week, a new confession, a new forgiveness.

meanwhile, the church of capitalism will continue on its crusade—absorbing every idea, every possibility, until the only creativity left will be in trying to avoid it, trying to salvage your own humanity in anything that isn’t a sales pitch or a product of some kind.